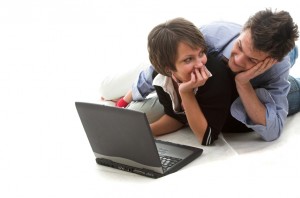 One of the main marriage stressors, and the top cause of divorce, is fighting about money.  If one of you is a spendthrift and one is a saver, financial feuding will be a given unless the two of you can find a way that is agreeable to both of you to manage your disparate financial personalities.  This, of course, is a struggle, and finding financial harmony can take years, though it can be done.

However, some spendthrifts bypass the years of struggle and instead pretend to be on the same page with their spouse all the while shopping in secret and hiding the items they buy.  These people may accrue thousands of dollars of debt on a credit card their spouse doesn’t even know about.

Of course, the spendthrift isn’t let off easily.  She can face guilt over betraying her spouse financially and fear of being caught.  (Note that even though I’m using “she” here, men can be just as guilty of financial infidelity as women.)

Contrary to popular stereotypes, the spouse who is financially “cheating” isn’t just a woman with a serious shopping addiction.  Financial cheating can cover a range of behaviors from lying about how much one earns, to having a separate secret bank account, to having a gambling habit, to shopping too much.

Almost always, the lie comes out.  The popular sitcom, How I Met Your Mother, delved into this episode when Marshall discovered that Lily had over $20,000 in hidden credit card debt thanks to her designer clothes habit.  Marshall found out about the deception when the couple was applying for a mortgage.  (Applying for a mortgage or paying taxes are two common ways people find out about financial infidelity.)

According to Forbes, the problem is more widespread than most of us think:  “In a recent survey, one in three Americans (31%) who have combined their finances admitted lying to their spouses about money, and another one-third of these adults said they’d been deceived.”  This deception could be lying about small things like hiding a small purchase you made to the biggies like hiding thousands of dollars of credit card debt.

How to Recover from Financial Infidelity

Recovering from financial infidelity is not easy.  According to Forbes, “Among couples impacted by financial infidelity, 42% said it caused less trust in the relationship.  Perhaps most alarming, 16% of these respondents said the money lie led to a divorce and 11% said it led to a separation.”

If you or your spouse has engaged in financial infidelity, complete transparency is necessary for rebuilding trust.  The one who hid money issues needs to be open to allowing his spouse to periodically check their credit reports and scores to make sure no new accounts have been opened.

In addition, a system of checks and balances may need to be set up.  For instance, I make most of our family’s purchases on Amazon, but the confirmation e-mail is sent to my husband’s e-mail.  That’s because my husband used to make the Amazon purchases for school books.  We’ve left the system the way it is because then he knows exactly what I’ve purchased on Amazon.  We’ve never struggled with financial infidelity, but if someone has, this is an excellent way to be open about your purchases.

Finally, couple’s and individual therapy may be necessary.  Couple’s therapy can help the couple learn to trust one another and move forward in their relationship, despite the financial infidelity.  Individual therapy may be necessary so the one who kept the secret can learn why he or she behaved that way and how to recover from the underlying issue that caused the infidelity.

Keep in mind, “‘Betrayal regarding money can be just as painful and damaging as other kinds of cheating,’ says Tina Tessina, psychotherapist and author of Money, Sex and Kids:  Stop Fighting about the Three Things That Can Ruin Your Marriage.  When a partner is caught concealing huge amounts of debt or involved in money-related addiction, the result can be a ‘total loss of trust, feelings of betrayal and destruction of the relationship'” (Forbes).

Recovery is not easy, but it can be achieved as long as the damage done was not too great and both partners are willing to work on the relationship.